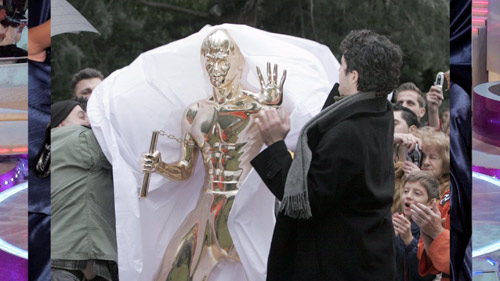 
Video in Progress 5: Reflections of the Past

The preservation of memory and interpretation of past events affects both the understanding of ourselves as well as the world around us. Paraphrasing the analyst of visual culture W.J. Mitchell, the absence of memory makes us slaves in time and prisoners in space. Memory helps us manage time and language. But the fragility and elusiveness of memories open the door to different views as well as a possibility for retreat. The decision to keep quiet represents a strategic loss of memory. This might reflect a deliberate erasing of history in the name of ideology or emotional support that helps an individual survive after traumatic events.

The selected works address, in different ways, the history of the former common state Yugoslavia – another story that today is nothing but a memory. Most distant events in terms of time and yet important to understand the present, are dealt with in the animated film by Vladislav Knežević who subtly uses archive newspaper material from the first half of the 20th century. Through revived pictures he takes us from the apparently peaceful period between the two world wars to the disaster of the Wall Street Crash in 1929 and the upcoming horrors of World War Two.

Ana Bilankov‘s video talks about the ideological erasing of memory in Croatia through the withdrawal of books on the National Liberation War (1941-1945) following the dissolution of Yugoslavia in the early 1990s. The artist explores the destiny of a ‘lost’ book written by her grandfather, which also mentions her grandmother, a teacher in the period of war and revolution.

In their video performance, Lana Čmajčanin and Adela Jušić represent how the traumatic experience of the recent war in Bosnia and Herzegovina has been embedded in everyday life. The artists address the issue of the narrative of war and indirectly raise the question of whether this topic should be discussed at all. Indeed, silence represents the deliberate erasing of painful memories.

The same topic is, in a humorous way, investigated by Aleksandra Domanović who refers to the phenomenon of “turbo sculptures”; memorials to popular non-national film celebrities, who with their moral attitude replaced true but morally questionable local historical figures blemished by crimes of war.

We move from the domain of war, revolution and history to that of capitalism and contemporary consumerist society. Through the narrative of former employees of the Crvena Zastava factory, Iva Kontić portrays the story of the collapse of the former flagship of the Yugoslav economy and consequently the downfall of a city that some call the Balkan Detroit.

The video by Marina Gržinić and Aina Šmid raises the issue of visual culture in a global capitalist society. It gives a theoretical analysis of capitalism and its impact on geo-political reality of the world (wars, colonialism, exploitation, etc.). The issue of local integration into the international arena is examined through a comparison of the patronising relationship that Western Europe used to have with Africa, with the relationship it developed after the fall of the Berlin Wall with the new EU members from Eastern Europe.

The selected artists address recent history in a critical manner and simultaneously raise the issue of their own involvement and responsibility they have to a changing society as artists. In their works they present stories whose constituent part is time. Time, in which the present is a consequence of the past, and the future a consequence of the present.