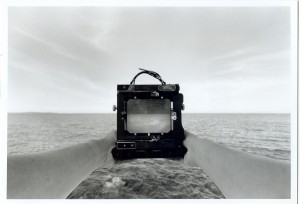 Branko Lenart is a migrant. He was born in Ptuj, but his family moved to Graz when he was six, and in 2001 he also became a citizen of Piran. Journeys are his passion, but perhaps it was the moving around as a child that contributed to him being so attentive to the space in which he moves, so that he doesn’t take it as a given fact but absorbs it intensively and concurrently documents his position in it. Most of his projects and photographs are designated by European, American, Asian, or African toponyms. Most of the major photographic countries carefully cultivate topographic records. A significant part of his opus belongs to a part of the stream interested in the subjective view of the landscape, but at the same time he is the heir of conceptualist practices of the late sixties and early seventies. He has been coming to Piran for almost forty years, but as a photographer he has never tended to tourist idyllicism. He sees the town with modernist eyes, in details, as a scene for a play of forms, bizarre or humorous coincidences and meta-photographic interventions. In this way, Piran retains its Mediterranean charm, but gains an analytic northern tone and a touch of intellectual distance as well. The town thus becomes a point of confrontation for Mediterranean sensitivity and Central European moderation … as in late August, when the first cool continental wind arrives after the blazing summer days, and the pavestones near the coast are still warm from the sun.
Primož Lampič