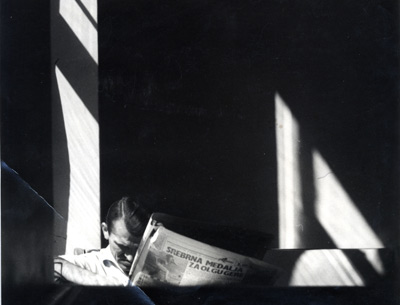 Solo exhibition of Rijeka based photographer Ervin Debeuc is focusing on his most fruitful artistic period between 1955 and 1962 when he was completely devoted to documenting ordinary life on the streets of his hometown. In 2010 Debeuc donated seventy photographs from that period to the City Museum in Rijeka. At that time he was a young photographer devoted to marginal motifs marked by formal and technical elaboration to depict spirit of certain time and place.

Born in Sušak, near Rijeka, in 1930, Ervin Debeuc began his productive career as a photographer following WWII in a flourishing local photo club as a part of well-developed amateur movement in the then Yugoslavia. He acquired his trade skills from the generation of the most important Rijeka-based photographer active between the two World Wars; in particular, Fernando Soprano, as well as Igor Emili and Abdona Smokvina. It was Smokvina who, together with young successors of Debeuc, affirmed Rijeka’s position, along with nearby Zagreb, as one of the most relevant photo centres in the former common state.

Debeuc’s artistic development in the field of photography was influenced by the then programmatic, ideological collectivism, whilst genuine individualism emerged in Rijeka and Croatian photography as late as the early 1970s. The 1950s postulates dictated the purity of the white-and-black photo technique, which Debeuc faithfully followed, creating his own mode in order to achieve the correctness of the image taken (“We were always taught that in photography, black must be truly black, white truly white and grey truly grey.” E. Debeuc). He is interested in photography in particular as a medium of his own expressiveness through an objective visual language based on two principal elements – composition and light. “To me, composition has always been the top priority,” says the artist today, whereas the main criterion used in recording the images was their deconstruction element. The latter can easily be detected; indeed, the balance of Debeuc’s frame most often lies in a strong counterpoint and is best expressed in an interesting relation to the light, which doesn’t lose its boundaries even in the strongest reflections, shadows on an unbalanced surface or their diffuse disappearing. Strong black-and-white contrasts and motifs highly resemble the poetics of the American film noir movement (filmmakers such as F. Lang, J. Houston, R. Walsh, B. Wilder), which testifies to the permeability of the borders of the then contemporary Western art. Nevertheless, in doing so, Debeuc in no way excludes the influences of the Soviet Union photography scene.

In the early 1960s, Debeuc got more intensely engaged in film, both experimental and documentary; the latter eventually dominated in his amateur and professional career. Notwithstanding the short period in which he was involved in photography, Debeuc remains one of the most important Rijeka and Croatian photographers of the second decade following WWII.