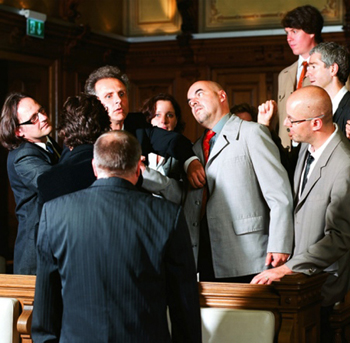 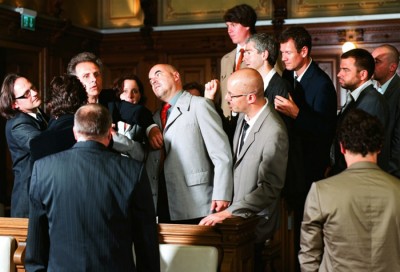 The Austrian artists collective G.R.A.M. was founded in 1987 by Günther Holler-Schuster, Ronald Walter, Armin Ranner and Martin Behr. The ‘band’ has been working for the past 10 years as a duo (Holler-Schuster & Behr) in various fields of artmaking: photography, film, video, performance and painting.

Among their best known body of work are Paparazzi and Reenactments which are mostly focused on famous or very popular type of images, no matter where these images come from (e.g. popular culture, mass media etc). Images from these fields are being manipulated, enacted, quoted or sampled.

In Reenactments – started one year after Paparazzi took shape –Günther Holler-Schuster and Martin Behr redo, as the title suggests, already existing pictures. In this series however, one cannot help but notice a certain development. Its first installment, Innocent Anarchists (1998-1999), consisting of scenes from Laurel & Hardy films that show the protagonists in more or less embarrassing situations, sets the tone of the whole project: a little clownish, a little over-done, a little goofy, but never too much. Then, in Inspired by… (2001), the artists seem to be looking for an adequate topic to take on. On the one hand we’ll find there iconic photographs from the sphere of art that circulated well beyond it while on the other, images showing particular moments from significant events of global and historical importance that have come to embody them.

Here one can already understand their specific strategy of image-making that – in my view – is better described by the verb “redo” than “reenact”. In support of this claim I would say that those images have nothing to do with acting or staging; rather, they are pure (or profane) constellations of gestures. This will take some explaining. In all of the Reenactment pictures we find the artists themselves, the other possible “positions” in the image taken up by people cast especially for this occasion, never professional actors; there is not the slightest attempt to project oneself empathically into the “role,” something that is most pronounced in the expressions of those who are always slightly out of sync with what is happening in the picture, suggesting that they are knowingly taking part in come kind of play. It is as if they found themselves assuming this or that position whose sense and meaning is foreign to them. For this reason I am inclined to claim that it is not photography, or video, or performance that is the medium of choice for G.R.A.M., but gesture.