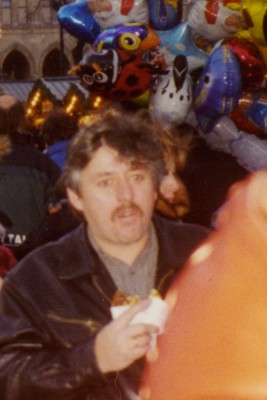 Imagine a nice family lunch. Everything is nice and homey, save for a thing or two, which is always there to spice up the occasion: That awkward moment that disturbs the homely atmosphere, subverting it, turning it upside down, preventing it from existing on its own. What makes the full measure of homely impossible in one’s home itself? That is is what Kamči is in Kamnik: The second location of one’s home–its setting.

The exhibited works, by five photographers, depict the conflict with this beast–the freak bothering them in their own home–and the setting where the conflict takes place. Aleš Senožetnik finds this freakish aspect in photographs from the family album where it is like a stranger, walking into shot by accident, or nonchalantly sunbathing in the background of a photograph of a happy family on vacation. Simon Podgoršek invades the homes of others, as their bother, as the one turning the spotlight onto what has always been there, or arriving as a welcome intruder. Jana Nakrst Dragaš finds the unease of home on a familiar road to Samotni mlin. Blaž Janežič faces the freak during the creative process, in his home workshop. Katja Jeras stalks it in a similar way, hoodwinking it by testing some basic photography tricks, sneaking up on it close, only to discover that what is in front of her is, in fact, her own back. Dušan Letnar astutely integrates the beast into the figures of those who propel the town forward, watch over it, and develop it, thus simultaneously destroying it.

In this process the artists become exorcists. When one’s home is invaded by a strange monster, one cannot seem to shake it off. Exorcists are called in to do the dirty job. Is this when home becomes home again? No, this is when the real nightmare begins. Home is destroyed, and homeliness becomes unbearable. What value is there, then, in this beast? The beast is what manifests itself at home as momentary awkwardness, as the thing one just has to do away with, and everything will be fine again. The value of the apparition lies in this obstruction–nowhere feels at home as much as home does, in the homeliness of one’s home. What is more, the beast is the face of this homeliness, and that is what we generally manage to sweep under the carpet, yet somehow, invariably it surprises us where and when we least expect it. The beast is homeliness at its most original, and this is what makes it particularly irritating and annoying. Kamči, as the beast, is the tagalong that could easily be Kamnik’s oldest inhabitant, where it not for the people so readily dismissing it as a spoilsport. The Unheimliche does not position itself in the Heim because it has always been there, as its core, its place, its setting.