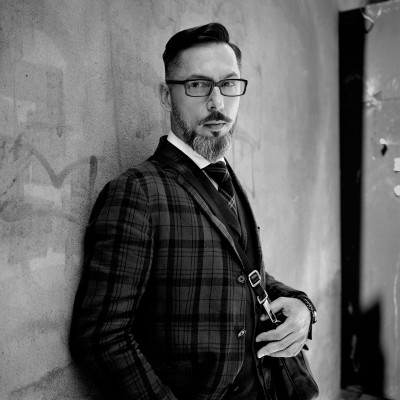 In 2011, what started as a 12-month project to photograph participants in the Slovenian Ministry of Culture’s Artist in Residence programme has resulted in a collection of photographs documenting more than four years of visiting Slovenian artists to London. Mike Crawford’s 52 portraits of artists–ranging from painters and poets, to fashion designers and film directors–have been photographed in an array of locations in and around the Shoreditch area, reflecting the diversity of this vibrant and historical part of East London.

Shoreditch, and its neighbouring districts, have always been places of transition: Huguenots settled in the area in the late 17th century, fleeing religious persecution in France; 200 years later, a number of Jewish refugees from Eastern and Central Europe emigrated to London, mostly to this part of the East End; and the 1970s saw thousands of Bengali immigrants move into what was by then one of the poorest and desolate inner London districts.

In recent years, Shoreditch has become a textbook example of the gentrification process, a process that typically begins in a rundown part of town popular with artists and other creatives on account of its cheap rent and abundance of empty, commercial spaces. The process ends when, having given the area it’s colour and glamour, the artistic community is ultimately priced out of the area by an onslaught of expensive restaurants, designer shops and other upmarket businesses that can afford the increasing property prices. Where once there were a handful of traditional pubs, now there are rows upon rows of artisan coffee shops, trendy bars and nightclubs, providing a boisterous nightlife the likes of which has not been seen since Shakespeare’s day.

In choosing the streets of Shoreditch as the location for his portraits Crawford hopes to give the viewer a distinctive impression of this very individualistic part of London. Crawford not only uses Shoreditch as a ‘backdrop’ to his subjects, a subtle reference to theatrical illusion¬, but also to portray the area that is ‘home’ for a month to each visiting artist. The programme has provided numerous Slovenian artists the opportunity to both learn about the culture of London and to creatively react to it. In return, by producing this body of work and meeting many emerging and established Slovene artists, it has given the photographer a far deeper understanding and appreciation of the importance of culture to Slovenia and portray the diversity of its artists.